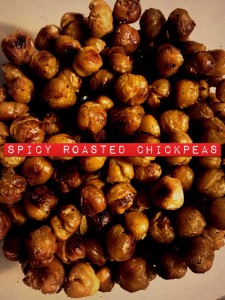 These delicious little chickpeas are super easy to make and will pick you up from that afternoon lull. They have a spicy kick from sriracha…a hot sauce that you could literally put on anything. Spicy foods boost the metabolism and may also help you to eat less. Chickpeas themselves make a nutrition-worthy snack. Why? They are nutrient-dense, packed with high protein and fiber to keep you feeling fuller longer. 1/2 cup serving of this spicy variety comes in under 200 calories. Want to give it a go? Here’s how:

Preheat oven to 400°F. Line baking pan with foil. Rinse & drain chickpeas in colander and blot to dry. Next, add chickpeas to your pan along with olive oil, salt, and sriracha. Mix together so chickpeas are evenly coated. Bake for 40 minutes. Make sure to shake the pan every 10 minutes so that the chickpeas get an even crisp. Cool and enjoy, sans guilt!

Color it with love

Cooking for two this Valentine’s Day? If so, vibrant red foods (and I don’t mean dyed red #5) are fun to incorporate into the meal with added health benefits. Many red fruits and vegetables are loaded with disease-fighting antioxidants (i.e. lycopene in tomatoes, anthocyanins in beets). Keep things sweet with fruits like strawberries–obviously, chocolate covered– raspberries, cherries, cranberries, or watermelon. On the other hand, maybe you’d prefer to spice it up with red chili peppers? Either way, you’ll be keeping your honey healthy and happy. Play with your food and make heart shapes for an extra special touch.

And for a cocktail? I couldnt forget that…a nice glass (or two) of red wine provides a dose of reservatrol, good for the mood and good for your heart. 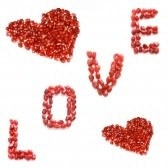 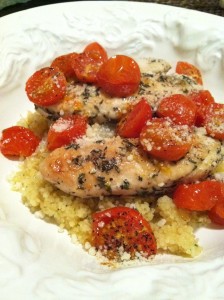 Herbs and spices are way underrated in my opinion; using them is an excellent (and healthy) way to flavor your foods and there are SO many to choose from. From lemon pepper to saffron to cilantro, there are more options than you can imagine. Not sure if you picked up on it, but I’ve been on a bit of a seasoning kick lately. What makes this even better is that the most amazing spice market I have ever seen, Kalustyan’s, is about five blocks from my apartment. This unassuming little Indian shop carries about 4,000 varieties of spices from all over the globe with exotic offerings from floor to ceiling. If you live anywhere in NYC and are into cooking, this place is a must-see.

Getting back to the thyme chicken, this weeknight dish only takes about 30 minutes, maybe 20 if you’re fast with a knife! Here is my recipe for lemon-thyme chicken over olive oil couscous with sauteed shallots and roasted tomatoes:

The first step is to season your tenderloins with salt, pepper, and thyme on both sides. Be sure to sprinkle salt lightly since the thyme is what gives this chicken so much flavor. In a nonstick skillet, heat olive oil over medium-high heat until very hot. Then add a teaspoon of minced garlic and sautee for 1-2 minutes, until golden brown. Add the chicken and cook until chicken is golden brown and loses its pink color, about 4 to 5 minutes per side. While cooking the chicken, squeeze the juice of half a lemon over the tenderloins. Transfer chicken to a platter and keep warm.

Meanwhile, cover a baking sheet with alumnium foil and drizzle it with olive oil. Halve the cherry tomatoes, season with salt, and cook in the oven for 15-20 minutes on 350. You also want to set up a small saute pan; drizzle olive oil and saute your shallots for about 10 minutes.

The couscous is easy too. Just cook according to package directions and add a tablespoon of olive oil to the cooking water. Once your couscous is done, combine with sauteed shallots. Top your couscous with some chicken and roasted tomatoes, sprinkle some parmesan cheese, and enjoy! Everyone will be asking, what are these seasonings you used?!

Getting fit with Farro 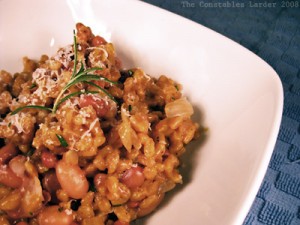 I recently returned from a short stay in San Juan, Puerto Rico and before heading there, decided I could use a week-long health kick to get beach body ready. No beer, chips, sushi or anything potentially bloat-inducing. I also challenged myself to eat only whole grains (no refined or processed grains allowed) and became pretty creative in my cooking. Interestingly enough, my favorite meal from the week involved an ancient throwback, farro. Farro (pronounced FAHR-oh) might be completely new to you, but it has been around forever – really, it is documented as the oldest and original grain cultivated by humans in the fertile crescent of the Middle East. It was the primary grain used by the Roman Empire and is still widely used throughout Italy today.
Nutritionally, farro is a rich source of vitamins and is high in fiber and protein, so it will keep you feeling fuller longer (a big plus). It imparts a nice, nutty flavor and adopts the taste of whatever you decide to mix in. While it might seem intimidating to cook with this ancient grain, it’s actually extremely easy to prepare and very versatile – you can throw it in soups, use it as a foundation for salads, or even eat it as a wholesome breakfast cereal. I bought pearled farro, meaning the hull of the grain is removed, which shortens cooking time though leaves nutrients intact. It only takes about 15 minutes to cook in water, just slightly longer than pasta!
My personal recipe is simple, but so delicious (even I was surprised):
Farro with roasted tomatoes, asparagus, and sauteed shrimp
Ingredients:
Start by boiling your water first and cook farro according to package directions. Cut cherry tomatoes in half and asparagus in three sections, removing ends. Line a cooking sheet with aluminum foil, lay out vegetables, drizzle with olive oil, and sprinkle with salt and pepper. Cook vegetables at 350 degrees for 20-30 minutes (I do 30 because I like my asparagus more crispy and the tomatoes get super sweet!) On high heat, pour olive oil in saute pan (be careful not to use more than a few tablespoons here) and once the oil is translucent, add a teaspoon of minced garlic. Saute until golden brown, just 1-2 minutes,  and add shrimp to pan. Cook shrimp for 2-3 minutes on each side, until pink.
Once you drain your farro, serve hot and add the vegetables and shrimp – I just mix all of this together in my bowl. Top with parmesan cheese and parsley. Eat and be amazed at how much you like farro. Unfortunately, I forgot to take a picture of my dinner but I’ll be coming back with more of my own recipes and the real-life photos to match.
Note: If you’re bold enough to try your hand at farro, here are some more great recipes to choose from: http://www.earthlychoice.com/farro-recipes.html
Posted in Recipes | Leave a comment